The knee is a large complicated joint, which can suffer from many types of injury or wear and tear.

Knee pain can be localised; referred from the hip joint; referred from the low back; and it may also develop as a result of foot or ankle injury. We must also be very aware of pain originating from other causes such as blood vessels or nerve tissue disease.

Arthritis is common behind the knee-cap (patello-femoral osteoarthritis), but we generally think of ‘knee arthritis’ as being within the main large joint itself; typically towards the inside joint line more than the outer side. 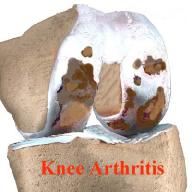 Although also common to other knee injuries, initial pain is frequently described on the inside and deep inside the joint itself. This is often associated with a stiffness, especially a difficulty in being able to crouch, weight bear or to turn corners in a direction that causes a sharp pain. Chronic knee arthritis often stops you being able to fully straighten or bend the knee due to excessive bony overgrowth that has developed over some years. Commonly the knee generally looks ‘thicker’ as it starts to enlarge and change shape.

A history of cartilage or meniscal tears or surgery also gives a high correlation to the predisposition of osteoarthritis within the knee. (In layman’s language: injury makes arthritis more likely to occur).

Fallen foot arches can also affect the knee joint, as the inside part of the knee will start to twist more than usual while also increasing its natural bend at the side of the knee joint. This increased twist through the knee joint strains the local knee soft-tissues and creates more problems.

Medication can only help with some of the swelling, but if want to delay or prevent a knee replacement, you will need to consider how to help it sooner, rather than when it is too late.

The osteopathic approach to arthritic knees is to give relief and restore function as quickly as possible. The stability of the joint can be helped with specific exercise whilst procedures (including laser therapy) may be used to tackle the pain and inflammation.

We have not found a way to prevent arthritis, yet, but one of the easiest approaches is to slow it down before it leads to disability and surgery.

It is better+ to consult your osteopath as soon as possible to help prevent deterioration.

What is Hoffa’s Infrapatellar Fat Pad?

The infrapatellar fat pad (often known as Hoffa’s pad) is a soft tissue that lies underneath the patella (kneecap) separating it from the end of the thigh bone (or femoral condyle). It helps to protect the knee like a shock absorber and also helps to lubricate the joint so it can move smoothly.

Long term knee pain is often caused by a build-up of gritty tissue after a fall on the fat pad.

The fat pad is attached to ligaments from the thigh bone to the knee cap. When we straighten our leg, the fat is pulled out of the joint.

Even injuring the ligaments of the knee – something as simple as playing sport- can damage this mechanism, so that the fat pad is not pulled out of the way, but is impinged between the femur and tibia when the leg is extended.

When you get a hard blow to the kneecap, the fat pad can become impinged (trapped) between the femoral condyle and the patella. As the fat pad has a lot of nerve cells, this injury is extremely painful. This condition is normally long-standing as it is made worse by extension (straightening) of the knee joint. The fat pad becomes irritated and may become significantly swollen.

It occurs in around 25% of patients with a knee injury and can happen to anyone at any age.

Tenderness and swelling around the bottom and under the kneecap

A cracking sound can sometimes be heard when standing up which feels like the lump of fat popping out of the joint. Over time this can become hard and gristly because it is being squeezed.

In many cases, the lump is so hard you hear a crack each time you straighten your leg as the gristle pops out of the joint.

Hoffa’s test with the patient in lying with their knee bent, the Osteopath presses both thumbs along either side of the knee patella tendon, just below the knee cap. The patient is then asked to straighten their leg. Pain and fear of performing the movement is considered a positive sign for fat pad trapping.

Your Osteopath would treat this condition by conservative methods which include:

Your osteopath will look for other “maintaining factors” that ay be preventing you from achieving full recovery.

Strapping the patella is known to be highly effective in fat pad impingement.

If left untreated, it can eventually lead to osteo-arthritis, but if the condition is caught early, an Osteopath can treat it by strapping the kneecap for around six weeks so the pad of fat is pulled away from the joint and it no longer catches.

If conservative treatment does not work then surgery may be advised which may involve the complete or partial removal of the fat pad itself. 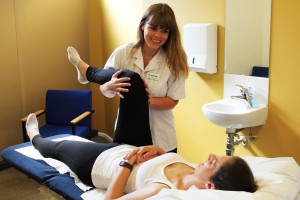